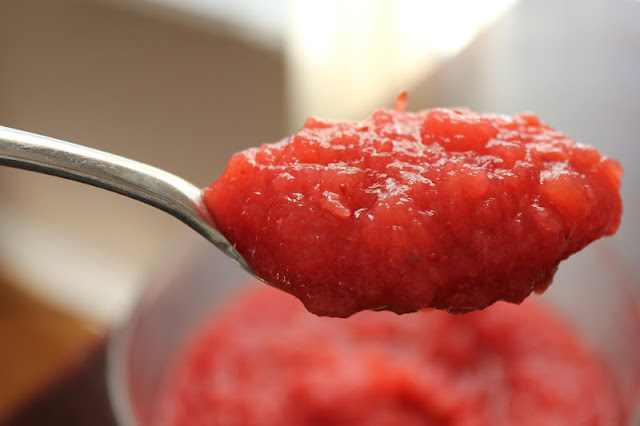 Applesauce is one of the first things I remember learning to cook.  I was in nursery school, which puts me somewhere around the ripe old age of three.  I don't remember much of the cooking process per se, but I do remember coming home with a folded apple card.  The apple had a smiling face.  I colored it red.  On the inside were directions for making applesauce, the tried and true method of cooking apples down in sugar and water.  They were typed on a typewriter.  I still have this card.  It's resting in my recipe organizer.  My name and the year 1985 are scratched in pencil on the back.  I dug it out before sitting down to write this.  The lesson I learned then, which still holds true now, is that some things are just better homemade, applesauce undeniably being one of them. 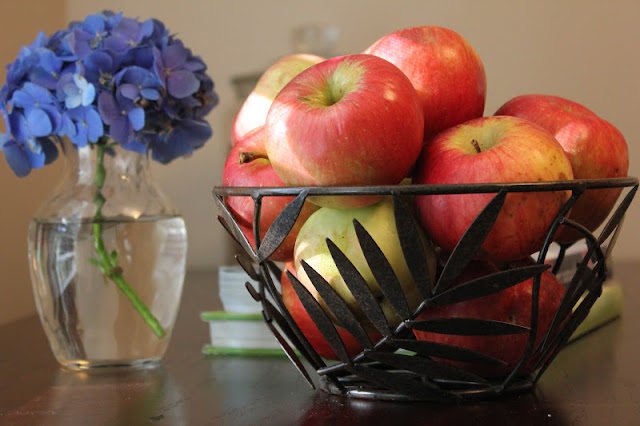 Applesauce makes great use of apples that have gone soft or have a few minor imperfections.  When I went to get my last CSA haul of the season, I had my pick of ten 'applesauce' apples.  Some were small, bruised, or had brown freckles.  I placed them in my fruit bowl by the window late in the afternoon.  If you look closely, you'll notice they're far from perfect.  But that doesn't mean they were any less juicy, any less sweet, or any less beautiful to work with.  In fact, I think they look awfully pretty sitting there in the sunshine.   That hydrangea has been holding on for some time now.  It was the last one I cut from our bush about a month ago. 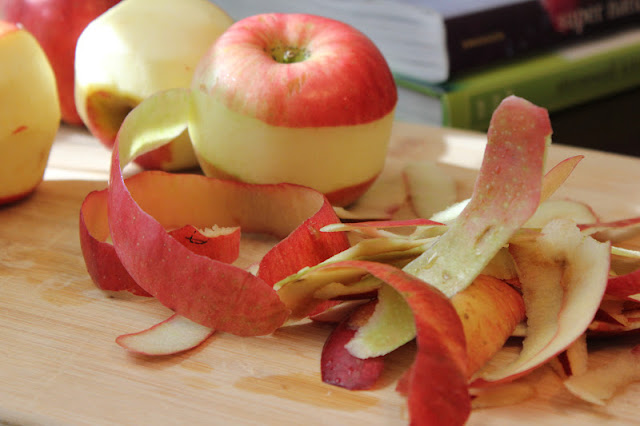 Some of you were wondered what I planned on doing with my cranberries from the harvest.  I'm holding onto some for the holidays, but decided to add cranberries to my batch of applesauce.  They lend a tart flavor that plays nicely off the apple's sweetness, not to mention creates a dark pink mouthwatering color.  I also like to add a cinnamon stick to the applesauce while it's cooking, partly for taste, partly to serve as kitchen fragrance. 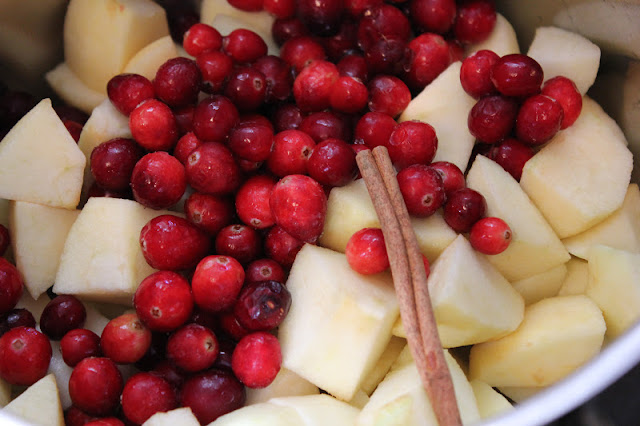 One of the benefits of making applesauce at home is that you can control the amount of sugar in your batch.  I choose to add a little maple syrup at the end to sweeten mine.  You could add more if you like, or forgo it all together and make a sugar free version.  It tastes sweet, slightly tart, and exactly like real-deal applesauce.  It's not something you can find on a jar in the supermarket.  The applesauce can be served hot off the stove over ice cream or desserts, and also works well in a bowl of oatmeal in the morning.  Yesterday, I ate a bowl of applesauce topped with pomegranate seeds, but mostly, I like it cold all by itself.  Making applesauce is right up there with making hot apple cider this time of year.  It's the little things, after all. 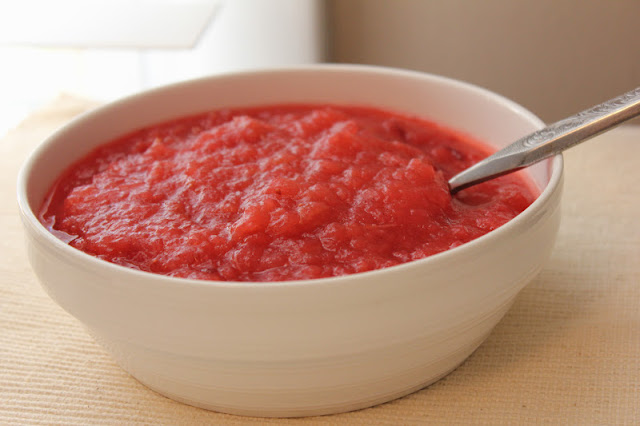 Add apples, cranberries, and cinnamon stick to a saucepan.  Add water, just enough to barely cover the fruit.  One cup was about right for me.  Add lemon juice.  Cover saucepan and bring the heat up to medium.  Let the fruit simmer for approximately 15 minutes until it has softened.  Remove from the heat.  Discard the cinnamon stick.  Mash fruit with a potato masher, leaving it chunkier, or until smooth.  Stir in maple syrup.  Taste and add more if you'd like.  Serve hot or cold.  Makes a little over 2 cups.
Posted by Stephanie at 4:03 AM

oh my goodness, this reminds me of the strawberry applesauce i was OBSESSED with having in my packed lunches. i think it might be worth it to make this for nostalgia's sake :) looks so good!

Ah cranberry applesauce used to be my favorite type of applesauce to get when my mom used to buy it in the grocery store. I rarely eat homemade applesauce, let alone make it myself, which is a real shame. This looks great, and I love the simplicity of it with just the few added flavors of cinnamon, lemon, and maple syrup. Honey would probably be a good sweetener to use, I'm guessing? Maybe I'll try it with that. Also, I loved your writing in this-- made me nostalgic just by reading it.

Pinkest applesauce in the land! Yay! I remember very early cooking lessons in kindergarten too--we made bread (!) and gingerbread men, and probably a bunch of other things. Don't all 5-year-olds love punching dough? :)

Hey Mackenzie-that's too funny. I have my own memories from packed school lunches. Happy to have brought you back ;)

Thanks Amy, honey would absolutely work! Glad you liked the writing-that means a lot!

Something about the pink color always makes applesauce taste better. My sister made some that was pink by leaving the peels on...and it was the best (and only homemade) I've ever had.

This is so beautiful and looks so tasty. I'm pinning so I don't forget to try this gorgeous recipe.

great idea to add cranberries and so in season

Looks amazing as usual! I've never made applesauce with a cinnamon stick before - only powdered cinnamon - but I will definitely try that next time. And I love the thought of cranberries and apples together - sounds so good!

that looks wonderful, and the color is so pretty!

that is such a cute memory. and a 3-year old chef - impressive!
the color is so pretty, i can taste it just looking at it!

I used to despise apple sauce. It must have been a texture issue, I don't know. Now, I love it. And I know I would love this flavored variety. It looks so pretty!